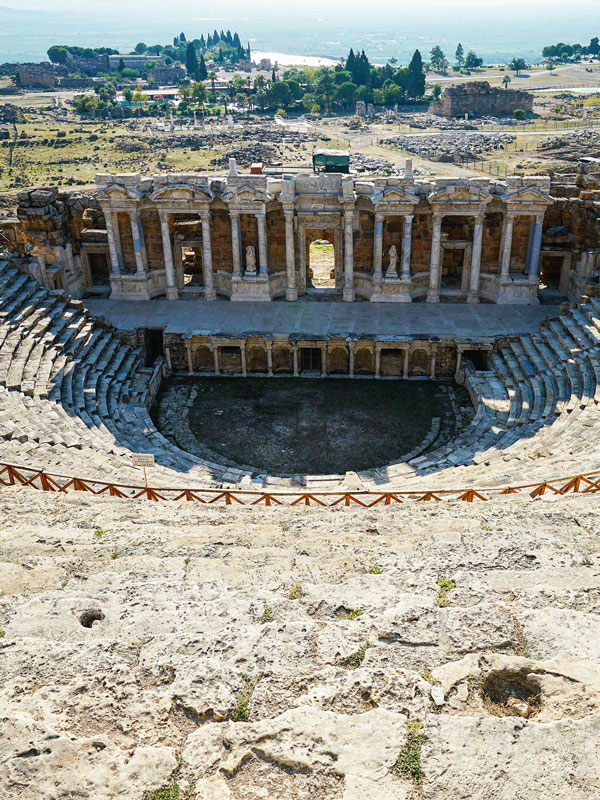 Turkey is the cradle of civilizations, with a historical heritage of 13 different civilizations, owing to its favorable position, it is a confluence of varied streams of culture.

The country is surrounded by the sea on three sides and the complicated inland geographical environment gives it rich tourism resources. Meanwhile, Turkey is also a modern country, with a rich history, culture, steep in legends, it also packs a huge variety of landscapes and climatic conditions. Topping it off the people are hospitable and friendly.

This is a place where every visitor can find something for themselves. Here are our top 7 reasons to visit Turkey

In Turkey, you can find a huge variety of natural attractions that you cannot see anywhere else in the world, such as Cappadocia and Pamukkale offer the most outstanding attractions among them.

In central Anatolia, Cappadocia is known for its unique scenery, exotic rock formations, caves and semi-reclusive historical sites, making this fascinating place looking like another planet.

In addition to the Greme Valley and Ihlara Valley exploration, you can spend a night in an elegantly renovated cave house, explore the ancient underground cities where thousands of people lived, take a sunrise hot air balloon ride over the fairy chimneys are just some of the things you can do to give you an extraordinary insight of the area.

Pamukkale, which is the Turkish word for “cotton castle”, along the southwest of the country. The area is famous for a carbonate mineral left by the flowing waters.

The hot calcium-laden waters spring from the earth and cascade over a cliff. As they cool they form travertines of hard, brilliantly white calcium. These white calcium form a blindingly white natural cascading fountain. The ancient Romans built the spa city of Hierapolis around this sacred warm-water spring.

The unique travertine and the ancient ruins were inscribed in the UNESCO World Heritage list.

There are a large number of historical sites throughout Turkey due to the civilization and historical development of this ancient country. Don't miss brushing up on some of their remarkable heritage while you're there.

Read on for the lowdown on our recommended Turkey's top 7 most impressive historical sites.

Turkey has a 7,200 km coastline, which makes it one of the top beach destinations on the continent of Asia and Europe. The country has the highest number of beaches, 463 in total and was awarded Blue Flag certifications of the world.

The Mediterranean and Aegean coasts have the best beaches, mountains and nature since they are relatively not developed. In some of the coastal national parks, there are the ruins of beautiful ancient theaters and temples. It is almost always warm. You might sunbathe in December, and there is little bad weather.

Antalya is a very popular resort city for wealthier Europeans. It tied with Istanbul with the number of visitors in 2019, and 30 million visitors arrived. It is on the Turkish Riviera on the coastline of the Mediterranean. It has big beaches were people swim. You can go in an underwater transparent tunnel, walk among Roman ruins, hike in the hills and mountains, and stay at the 421 5-star resorts and hotels. There is an old quarter to explore, dine and shop in.

The Black Sea region, though it has beachside resorts, isn't as good a place to go swimming. Except for places in Istanbul around Kilyos and Şile, people don't go swimming on the shores of Black Sea because there are few suitable big sandy beaches. Instead, rocky coastline drops into the sea, and there are strong winds and big waves that makes swimming dangerous. Except for the summer, it is too cold, and it rains much in the summer. The main industrial region is the north too, and there is pollution. The Marmara Sea is also polluted and doesn't have good resorts and beaches.

Turkey not only has a long history but also has many wonderful museums. The cultural relics unearthed from various sites throughout the country are well preserved in the different museums.

From Turkey's largest museum of mosaics (zeugma in Gaziantep) to the museum of Ottoman palaces in Istanbul, visitors can experience the legend behind many of these rarities.

For seeing ancient cities, ruins and architecture, Turkey is amazing. Interesting historical places abound. One of the world's biggest domes dates from the 500s. It is still standing in Istanbul and is called the Hagia Sophia.

Cappadocia in central Anatolia is mentioned in the New Testament. There are odd stone formations, and people carved out dwellings, churches and now even hotels in the soft rock. You can book a room in one of these carven accommodations.

Ephesus is a city mentioned in the New Testament. It is a huge collection of ruins that are well preserved and rival the ancient ruins in Athens. It was one of the biggest Romans cities.

Antalya has Roman ruins such as a Roman tower, a huge amphitheater, and Hadrian's Gate. Troy, Pergamon, Ephesus, Harran where Abraham lived south of Şanlıurfa, and Göbekli Tepe thought to be the oldest townsite in Turkey are other cities and towns to see in Turkey.

Eastern Turkey has mountains, dramatic, spare scenery, and vast arid deserts dotted with archeological sites. The northern region is high and mountainous, and winters arrive early, are harsh, and last long. Eastern Turkey is less developed than the western part, and tourists also enjoy being in the countryside. The transport infrastructure is still undeveloped, so going by private driver is the best way to travel.

From Erzurum in Eastern Turkey, you can visit the Kaçkar Mountains, Doğubayazıt, and Mount Ararat where Noah landed. The Kaçkar Range is excellent for trekking and river rafting and seeing the countryside agricultural towns such as Yusufeli as well as ancient churches. Kars has good scenery too.

On the western coast on the Aegean Sea, the Lycian Way walking path is famed as are Gallipoli's nature areas.

Turkish cuisine is one of the world's three major kinds of cuisines (Chinese, French and Turkish). It is largely the heritage of Ottoman cuisine, as it is fused with Central Asia, Middle Eastern, Eastern European and Balkan cuisines.

Turkish cuisine is not at all spicy and olive oil is used in their cooking. You would not find pork in Turkish cuisine as it is considered illegal to eat pork, because of their religious belief. Lamb is the common meat found in classic dishes in Turkey: Şiş Kebap (a type of lamb shish kebab), Baklava and Manti (Turkish dumpling).

Turkish people are known for their hospitality. Spending time with them will be one of the most memorable experiences.

Most people may feel overwhelmed when visiting a new country due to the culture, language, food and environment. However, you need not have to worry about these in Turkey. The locals are more than willing to help you, and they'll do it with a smile. The enthusiastic locals may even invite strangers to their homes for a nice meal or a taste of Turkish tea.

9. Great Value for Money Is Also a Big Factor

The country abounds in 5-star hotels, and they are generally appreciated as top quality. But the prices are low.

The cost of living in Turkey is low. It is much less expensive than Greece by comparison.

The country is in a state of flux. There is a mix of modernity and tradition. You will find high-quality accommodation and restaurants in every major city, yet you'll be able to experience the local culture and the ruins of ancient cities.

Turkish culture began about 1000 AD when Turk nomads from central Asia conquered a broad region. The Mongols invaded central and eastern Turkey in the 1200s, and they influenced the culture. The Ottoman Empire started to conquer portions of Anatolia in 1300 and finally conquered all of it in the 1500s.

Up until the 1400s when sailboats replaced land trade routes for commerce and travel, the Ottoman Turks profited from and was culturally influenced by the Silk Road trade with China, India and the Far East. Then the Ottoman rulers set their sights on Europe and started to try to both emulate and invade Europe. They conquered parts of Eastern Europe and Central Europe in the 1600s.

Visit Turkey With us

Would you like to experience the perfect trip to Turkey, but don't know where to start? Our experienced travel advisors will help you tailor-make a trip. We take care of all the details so you can just relax and enjoy your vacation.